The keynote at this year’s PDC was perhaps the most uninspiring one I’ve seen in the 15 years I’ve been attending these events. It wasn’t bad and the announcements were quite significant. It was just kind of boring, that’s all. In past events, the announcements were intermixed with a fair amount of levity and there was always the “Bill” film to look forward to.

Like all PDC’s, the topics are about what’s coming in the next year or so. Microsoft is nothing if not prolific when it comes to new technology. Here’s what was announced today (that I saw).

Windows Azure – Microsoft’s Cloud Operating System is really their foray into IT services. The difference here is that they treat it as platform. Write your application to run on Azure and it can scale from small to mega-large including co-locations, replication and provisioning with nothing more than a change to the configuration file. Definitely going to be a game changer. The cool part is you get to use your current .NET/Asp/SQL Server skills without a huge refactoring. There is going to a lot of press and coverage on this so I won’t go into details here. You can read more about at it http://azure.com.

**C# Futures **– Anders Hejlsberg, the chief architect and inventor of the C# language, always gives great talks. Three years ago, I was blown away by is LINQ presentation. This presentation was just as good. My colleague, Brian Genisio, has written an excellent post on the C# 4.0 feature set which saves me the trouble of having to write it here.

The one mention he left out was that the C# compiler is being rewritten in managed code (I assume C#). The reason, as he does point out, is to expose the compiler itself as a service allowing for scripting and meta programming.

**Visual Studio -2010 **– I went to several sessions on the up and coming features of the next version of Visual Studio. The new Visual Studio is a very big project and spans almost a dozen sessions in one form or another. Here are some highlights.

Finally, I took a few pictures in an attempt to show you the size and scale of this event. It’s really quite amazing how well theh handle such large groups of people. 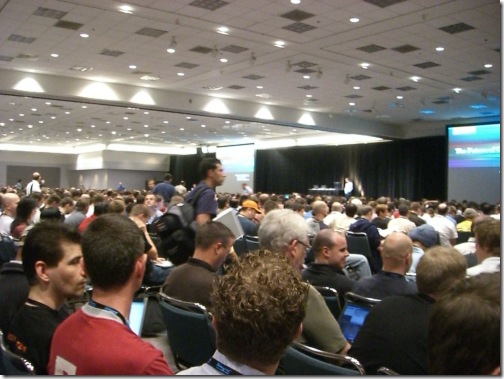 The smuggy figure on the stage is Ander Hejlsberg 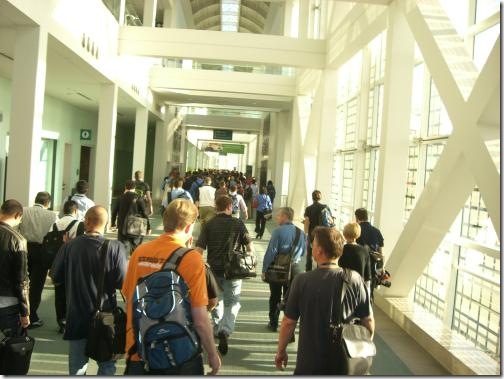 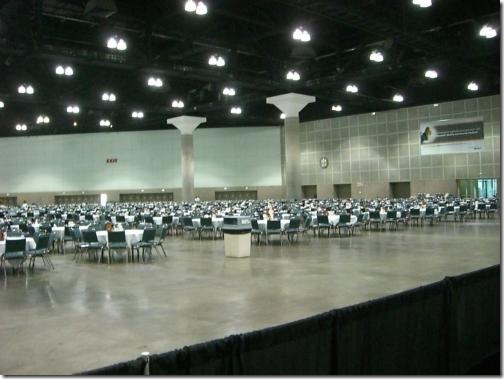 These two pictures are a view of one of the serving areas for breakfast and lunch. It’s roughly the size of football field. There are two of these areas and they need all of it. Good eats by the way. 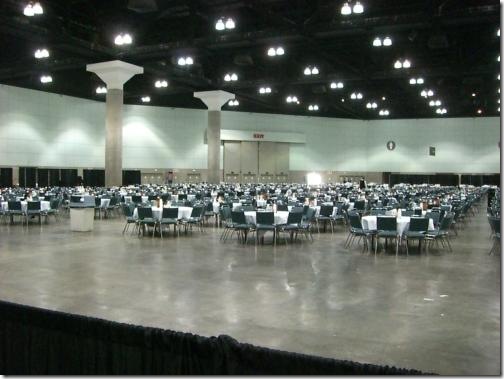 So that’s day one in a nutshell. It’s exciting but it’s also a bit grueling at times. I’m up 6:00 am and out the door by 6:45 am. I usually hit the hotel room between 9 and 10 in the evening and it’s pretty much non-stop in between.

Final mention before I turn-in. We’ll be getting Community Technology Preview bits for everything I saw today. See you tomorrow.