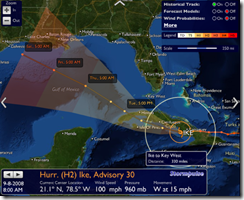 Scott Hanselman’s Computer Zen - Family Calendar Management - Sharing Life between Outlook and Web Calendars and the Magic of iCalendar – How to sync calendars from various sources.

SoundUnwound: Wikipedia for Music - New wiki resource from Amazon where you can find comprehensive information about musicians, bands and all their musical work.

Managed Extensibility Framework - A new library in .NET that enables greater reuse of applications and components. Using MEF, .NET applications can make the shift from being statically compiled to dynamically composed. I’m still trying to get my brain around this one. Very interesting.

Software teaches helicopters new tricks - Discovery.com - A computer algorithm developed by Stanford University scientists learned, and then flawlessly replicated, more than 20 years of radio-controlled helicopter expertise. Sort of like the woman on the TV show “Hereos” who can watch something once and then mimic it exactly.

An Introduction To Codecs, Converters and Rippers - Codecs are necessary to play various different ‘digital streams’ (thank you Wikipedia for making me sound smarter) and files. When you start dealing with video you’ll soon discover there is an awful lot of them. With these packs however you should have no trouble playing any video or audio files you encounter or download…

Review: Intel’s new 80GB SSD is faster than the best HDD – Another year or two and hard drives may go the way of floppies. At least for consumer products.

An Eval Function for C# using JScript.NET (JavaScript) – JavaScript’s Eval method makes for quick, interactive, runtime expression evaluation. It’s what I used in my Calculator sidebar gadget. Here’s a slick way of using in C# through the CodeDom which avoids the overhead of having to deploy an extra assembly.

Has the Large Hadron Collider destroyed the world yet? – I won’t spoil the surprise…

5 Useful Tips for ASP.Net Application – Unlike a lot of these types of articles, these tips really are useful.

Brad Abrams : Evolving a .NET Framework 2.0 Application to .NET – Interesting white paper on how one company migrated from .NET 2.0 to .NET 3.5. We just did this ourselves where I worked and had far fewer issues. Good read.

Try Windows Vista Online in your Web Browser Without Downloading – Slick demo. Only works on IE however.

Newest Video Phones are Free - The latest video phones from ACN are simply awesome. And they’re Free for a limited time. Access through our rep site at http//:mikejean.acnrep.com. This changes everything!