My 9 year old son is nuts about NASCAR.

Who knows where he gets it from. I certainly have (make that had) no interest in it. Still, it’s what he likes so I do my “Dad-ly” duty and indulge his interest. Actually, as sports interests go, this one is OK by me. Racing is technical, requires skill and determination and most of the drivers are good role models. As a parent, I can’t really find fault. 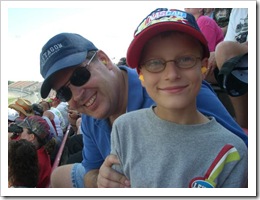 Fortunately for us, we live about 25 miles from one of the best racing facilities in the world – Michigan International Speedway. MIS is a two mile oval with wide turns and fearsome straightaways. At 180 MPH, these bad boys are lapping the track every 41 seconds. I imagine it’s quite a rush to fly around that oval at those speeds.

So this year as a gift for my son’s birthday, we went to a NASCAR race. The CarFax 250 is a Saturday race leading up to the big Sunday event. Many of the big names don’t race in it. Still, there were plenty of recognizable names in the field including, Tony Stewart, Carl Edwards and Mark Martin. Mark Martin is of particular interest to us since he hails from Batesville, AK, where we visit friends from time to time. Martin has a nice little car museum in his car dealership there that is worth the visit.

MIS is a huge place. You park literally miles from the track and take shuttles to the grandstands. Unlike many places I’ve been, MIS handles large crowds of people well. Everything is spread out so there’s lots of room to walk around. There are very few pinch points. When you arrive, you are greeted with a huge array of vendors. It easily takes a couple of hours to walk around and take it all in. There are the usual car shows, sponsor booths and pretty women to ogle over. 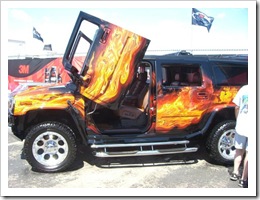 The race itself was a bit of a let down by comparison. There were yellow flags in the first and last lap of the race. In fact, the race was actually won in the pits. With 10 laps to go a caution came out. The leaders all pitted at the same time. We could see the entire pit row where we were seated. The seconds mattered here. Stewart, who was 10 seconds up until the caution, pitted along with Edwards and Martin. By the time they came out, Stewart was 4th, Martin 3rd and Edwards 1st. The difference in pit times could not have been more than 2 seconds. Bummer, because Stewart was running the better race. It looked to be an exciting finish in the last lap when a caution came out in turn 2. Finishing under yellow takes the thrill out of the finish.

Not being a sports fan, I never understood the fascination some people have with identifying with their favorite sports hero. To my surprise, when the race ended, very few people left the stands. Instead, they stayed to watch the driver (Edwards) do a victory lap and customary burnout/spinout. People were actually jumping, shouting and celebrating with all the gusto they could muster. I imagine part of the fun of sports is living vicariously through others. It seemed to me that the victory meant almost as much to the fans as it did to the driver. I just don’t have the “sports gene”, which I suspect is my loss given the enthusiasm that was going on all around me.

As sporting events go, it was a good day. Great weather, decent entertainment, a surprisingly polite and enthusiastic crowd, and some quality time with my boy. I could get use to this NASCAR thing