Was that really necessary?

Well, OK, may-beee it has something to do with me 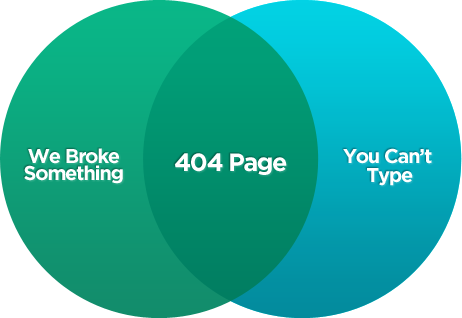 More than probably want to know about 404 pages

In the 1980′s a group of scientists at CERN (Switzerland) started working on what was to become the media revolution: the World Wide Web(WWW), or simply ‘the Web’. Their aim was to create a database infrastructure that offered open access to data in various formats. They started developing their protocol called CERN’s internal network.

In an office on the fourth floor (room 404), they placed the World Wide Web’s central database.Any request for a file was routed to that office, where two or three people would manually locate the requested files and transfer them, over the network, to the person who made that request.When the database started to grow the number of requests grew and also the number of requests that could not be fulfilled, usually because the person who requested a file typed in the wrong name for that file.Soon these faulty requests were answered with a standard message: ‘Room 404: file not found’.

Later, the manual processes were automated and people could directly query the database but the error message remained the same ’404: file not found’. The room numbers remained in the error codes in the official release of HTTP (Hyper Text Transfer Protocol) and are still displayed when a browser makes a faulty request to a Web server.